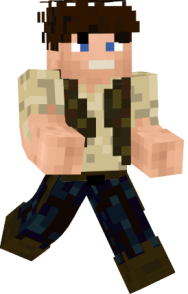 Deeny has been playing Minecraft since spring 2014 and still enjoy the game a lot.  He became a member of 77th Combine during it’s second season, in February 2017.  During this time Deeny have become a great builder, terraformer and a pretty decent redstoner.  You will usually find Deeny spending his time working on a large build which is also use as his base. His building style varies with each season, from a military camp in season 3 to an underground mining outpost on season 5.  All of these were incredible builds which he is very proud of.  However his proudest compliment so far is a western-styled harbour created on season 4.

For season 6, Deeny has teamed up with Kunal2020 and built a sci-fi style spaceport, we look forward to seeing how this creation turns out.

Deeny enjoys blogging about his creations on the 77th Combine as well as his personal world Dernalia, you can find him at Deenybuildermcpe for more stories and photos.